Congratulations to Jessica Foster, Justin Kaufman, and Roz Bienvenu who, along with trial counsel, Paul Hultin, secured an important ground water victory this week in New Mexico, on behalf of the New Mexico Environmental Law Center and the San Pedro Creek Estates Homeowners’ Association, among many others.  The Second Judicial District Court of New Mexico applied the “conservation” element of the state’s ground water permit statute, NMSA 72-12-3, to uphold the Office of the State Engineer’s denial of a major developer’s application to withdraw ground water in the East Mountains near Albuquerque.  Judge Shannon Bacon decided the case against the developer and in favor of the neighboring landowners whose wells would be significantly impacted by the proposed development.  This decision sets important precedent going forward as to what a developer must demonstrate to show adequate “conservation” in a permit application under New Mexico’s ground water statute.  You can read Judge Bacon’s findings and conclusions here.  Coverage of the decision by the Albuquerque Journal and the Santa Fe New Mexican can be read here and here, respectively.  You can also read all about the trial that led to this important decision here. 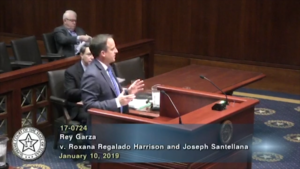 This week, Thad Spalding presented argument in the Texas Supreme Court in Rey Garza v. Roxana Regalado Harrison and Joseph Santellana, individually and as representative of the Estate of Jonathen Anthony Santellana, Deceased, a case involving whether an off-duty police officer, working security for his apartment complex, is immune from suit after shooting and killing Jonathen Sanatellan.  Thad’s argument can be seen here.

As we say goodbye to our good friend Peter Kelly, who starts his new chapter as a Justice on Houston’s First Court of Appeals today, we start one as well–as Durham, Pittard & Spalding, LLP. Good luck Peter and a very Happy New Year to everyone!