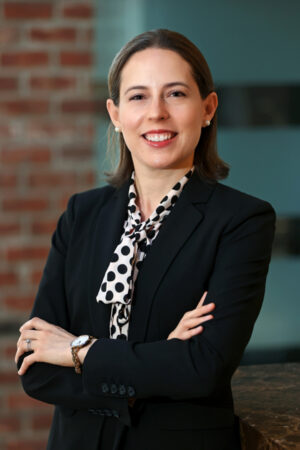 Rosalind B. Bienvenu is a partner in the firm’s Santa Fe, New Mexico office.  She focuses her practice on civil appeals and strategic trial support at both the state and federal level.  Prior to joining the firm, Rosalind worked as a trial attorney specializing in complex litigation including catastrophic injury, toxic tort, product defect, and pharmaceutical cases.

Rosalind earned her law degree from New York University School of Law, cum laude, where she was a Florence Allen Scholar and Managing Editor of the NYU Law Review.  During law school, she interned at Sanctuary for Families, New York’s leading service provider and advocate for survivors of domestic violence and sex trafficking.  She began her legal career at Paul, Weiss, Rifkind, Wharton, and Garrison LLP in New York, practicing complex commercial litigation with a focus on securities, class action, intellectual property, insurance, and white collar criminal matters.  Committed to offering pro bono legal assistance, she also successfully represented clients seeking political asylum and refugee status in the United States.  From 2014 to 2015, she served as Law Clerk to the Honorable Paul J. Kelly, Jr. of the United States Court of Appeals for the Tenth Circuit.

Rosalind is licensed to practice in New Mexico, Texas, and New York.

Affirming trial court’s order denying special appearance by an aircraft manufacturer in a wrongful death products liability case. The plaintiff’s husband was killed when his aircraft crashed in Bexar County. The Minnesota-based aircraft manufacturer challenged the court’s exercise of specific personal jurisdiction, arguing that the manufacturer lacked the necessary minimum contacts with Texas because the plaintiff’s claims did not arise from or relate to any purposeful activity it conducted in Texas. The Court of Appeals, citing the recent U.S. Supreme Court decision, Ford Motor Co. v. Mont. Eighth Jud. Dist. Ct., and the recent Texas Supreme Court decision, Luciano v. SprayFoamPolymers.com, LLC, rejected the aircraft manufacturer’s arguments and held that the the exercise of specific personal jurisdiction was proper.